The Coming Race War: And Other Apocalyptic Tales of America After Affirmative Action and Welfare Richard Delgado 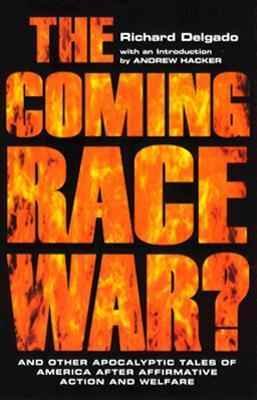 Our political and racial topography has been radically altered. Affirmative action is being rolled back, immigrants continue to be targeted as the source of economic woes, and race is increasingly downplayed as a source of the nations problems. Legal obstacles to racial equality have long been removed, we are told, so whats the problem?And yet, the plight of the urban poor grows worse. The number of young black men in prison continues to exceed those in college. Informal racial privilege remains entrenched and systemic.

Where, asks Delgado in this new volume, will this lead? Enlisting his fictional counterpart, Rodrigo Crenshaw, to untangle the complexities of Americas racial future, Delgado explores merit and affirmative action- the nature of empathy and, more commonly, false empathy- and the limitations of legal change. Warning of the dangers of depriving the underprivileged of all hope and opportunity, Delgado gives us a dark future in which an indignant white America casts aside, once and for all, the spirit of the civil rights movement, with disastrous results.

Comments
Comments for "The Coming Race War: And Other Apocalyptic Tales of America After Affirmative Action and Welfare":