I Came Only for English.. Ruth Kowalczuk 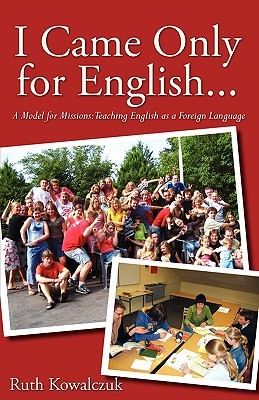 The reader will get a glimpse of Poland during turbulent but exciting years of its history (the 1980s and 1990s). The story shows how teaching and learning English, first at camps and then at Wroclaw Language School quite naturally brought strangers together, broke down barriers and built relationships in which God touched dozens and dozens of lives.

First-hand description of events, peoples stories and testimonies make the account real and alive. Ruth Kowalczuk is a retired lecturer of English at the School of Economics in Wroclaw, Poland and holds an MA degree in American Literature from the Warsaw University. She translated into Polish parts of New Testament Commentaries by William Barclay and Seven Deadly Sins by Billy Graham. She is the author of a book The Adult Sunday School (Zborowa Szkola Biblijna) and was a pioneer in setting up the Adult Sunday School in Wroclaw Baptist Church and in other churches.

Ruth Kowalczuk was an initiator and leader of English language evangelistic camps ministry in Poland in the 1980s. She is a founder of Wroclaw Language School affiliated with the First Baptist Church and served as its Director in 1989 - 1997. For over a decade she has been a co-leader of a school related ecumenical ministry among women.

She is a mother of an adult son who is a journalist.

Comments
Comments for "I Came Only for English..":