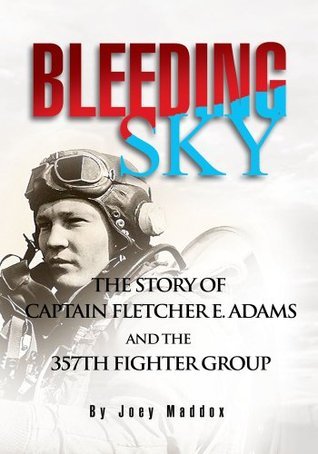 Adams and the famous 357th Fighter Group. Known collectively as the “Yoxford Boys” the 357th was the first P-51 Mustang fighter group in the history of the “Mighty” 8th Air Force. Although active for less than two years during World War II, the group set many records and became one of the greatest fighter outfits the U. S. Air Force would ever send into combat.Between February 1944 and April 1945 the 357th produced more aces than any other American fighter group. They also shot down more German jets than any other group in the Army Air Corps during the Second World War.

On January 14, 1945, a day that will forever be known as “The Great Rat Race” and “The Big Day”, the 357th Fighter Group shot down 55 ½ German fighters in just over two hours setting a record in military aviation that has never and probably will never be broken.Among the members of this amazing group of fighter pilots were:Chuck Yeager, Bud Anderson, Kit Carson, John England, and others destined for fame.

So was Captain Fletcher E. Adams, a native son of the small village of Ida, Louisiana. Then, on May 30, 1944, Adams, the leading ace of the 357th Fighter Group with 9 kills to his credit, was shot down over Tiddische, Germany and murdered by civilians on the ground.This is their story as told by the pilots through their books, diaries, and interviews with the author. Theirs was an adventure never to be matched again in the annals of aviation history. Find out what it was really like to go “to war with the Yoxford Boys”!“This book gives us the best insight into a tragic causality of WW II and the mystery of what happened to Captain Fletcher E.

Adams. Joey Maddox’s use of other voices, quotes and investigative interviews make the story interesting. You’ll not only learn about Fletcher Adams but also the history of the 357th Fighter Group. I found the use of Adams’ personal diary, an illegal practice in wartime, particularly interesting to learn of his personal feelings during his training and combat.”Clarence E.