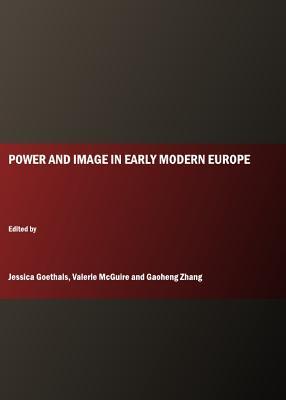 Apparently aesthetic choices by artists may also have been the means to consolidate and subvert institutionalized or non-institutionalized bodies of power. Meanwhile, communities in Europe reacted to the intrinsic power of the image in literature and letters, commenting upon both its use and abuse. Both diachronic and geographic connections are made among disparate but important moments of image making in the twelfth through seventeenth centuries.

The influence of Descartes is traced from La Rochefoucauld and the communal spectacles of the Ancien Regime salon, to the Netherlands and Rembrandts sketch, Death of the Virgin. Shakespeare bears similar anxieties about Joan of Arcs transgression of gender boundaries in Henry VI, as does Castigliones Courtier when serving the Renaissance Prince.

Spensers dilemma about the (non)difference between fiction and history resolves itself in the same way as does the Byzantine rejection of iconoclasm. Other articles in the collection examine anomie in Vatican frescoes by Giorgio Vasari, corporeal decay and the supernatural as spectacle on the early modern English stage, and affective self-perception and subjectivity in the scoring of Italian opera.

[..] not as just a conference volume, but [as] an organic group of essays on early modernity. The essays span an impressive number of cultures - from Byzantium to England, Italy and Spain to the Netherlands - and theorize the image from a number of disciplinary vantage points.

Not surprisingly, art history and theatre are well-represented, but so are music history and literary studies. Most of the essays are short, but sufficiently developed to allow for thoughtful arguments on the status of the visual in early modern culture: on the stage, on the page, and as artistic and musical representation. [a] they [do] deliver fine close readings and leave me sufficiently intrigued to want to return to, or familiarize myself with, the original texts.

I come away from this collection encouraged about the state of graduate studies in Europe and North America. -Jane Tylus, Professor of Italian and Comparative Literature and Vice Provost for Academic Affairs, New York University The essays are interdisciplinary and touch upon many themes that lie outside my own field of specialization. I was therefore surprised and pleased to find them not only original and instructive, but also inviting and accessible to the non-specialist.

Although they range far with respect to chronology and theoretical suppositions, they are coherently united in their concern for the functioning of the image in the conservation, revision or critique of socio-political power in their respective cultural contexts. I will mention three essays, representing three different fields, as striking examples of disparate images used to consolidate, reconstruct or overthrow the dominant powers of their times. Kathryn Falzarenos essay, Mothers Milk and Deborahs Sword, is a close reading of Shakespeares portrayal of Joan of Arc in Henry VI.

It is a close analysis of the paradoxical status of Joan, Saint of the French, strumpet for the English, Christian warrior maiden, contrasting with Deborah in the Ancient Testament. The dominant and totally unexpected image which brings together the contradictions embodied by Joan are the breasts, the source of nurture in the figure of Mary, but an encumbrance for the mythological amazons who removed one breast to facilitate their use of the bow. Ljubica Ilics Echo and Narcissus: Labyrinths of the Self, is an elegant reading of echo music, the apparently impossible translation of the Ovidian story into music and opera.

Ovids story represents the nymph Echo as the auditory equivalent of Narcissus reflection -- echoing sound as reflecting light. Ovids echo myth undoubtedly influenced opera by Jacopo Peri (during the time of the Medici) and then, Monteverdi in the musical setting of Orfeo. Finally, Elissa Auerbachs Taking Marys Pulse: Cartesianism and Modernity in Rembrandts Death of the Virgin is a brilliant commentary on the Dutch painters rendering of an ancient theme, the dormition of the Virgin, but at the center of the painting is the figure of a physician taking the pulse of her limp hand.

The intrusion of this scientific element in the ancient iconography of the event of Marys death is the unmistakeable sign of the wave of modernity that swept over the Netherlands with the popularity of Cartesian philosophy and science. -John Freccero, Professor of Italian and Comp. Lit., NYU

Comments
Comments for "Power and Image in Early Modern Europe":